A CASE CX210 Excavator is a heavy-duty construction machine that is used for digging, grading, and excavating. The excavator is equipped with a long arm and a shovel-like attachment, known as a bucket, that can be used to dig into the earth and move large amounts of dirt and debris.

The CX210 is a versatile machine that can be used for a wide range of construction projects, including road and bridge construction, building foundations, and land development. It is also commonly used in mining and quarrying operations.

One of the key features of the CX210 is its ability to perform precise digging and grading. The excavator’s arm is equipped with a range of movement, allowing the operator to dig and grade at different angles and depths. This makes it ideal for projects that require a high degree of accuracy, such as building foundations and road construction.

The excavator also has the ability to rotate 360 degrees, which allows the operator to easily change the direction of the bucket. This feature makes it possible for the operator to work in tight spaces, such as the corners of a construction site, and to easily move the bucket from one side of the machine to the other. 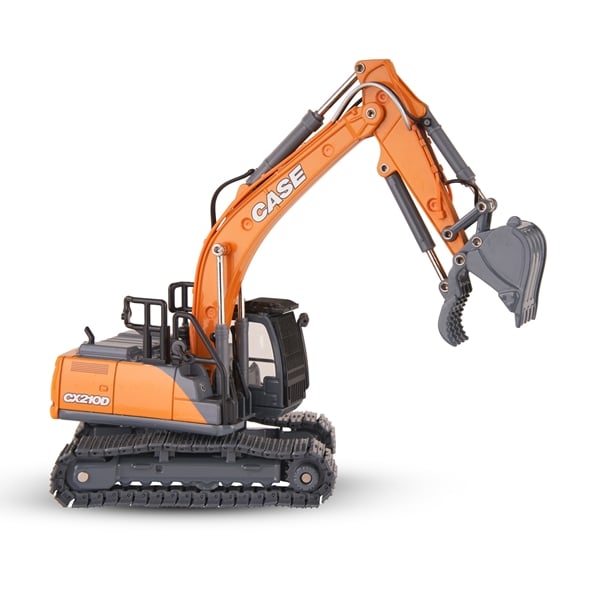 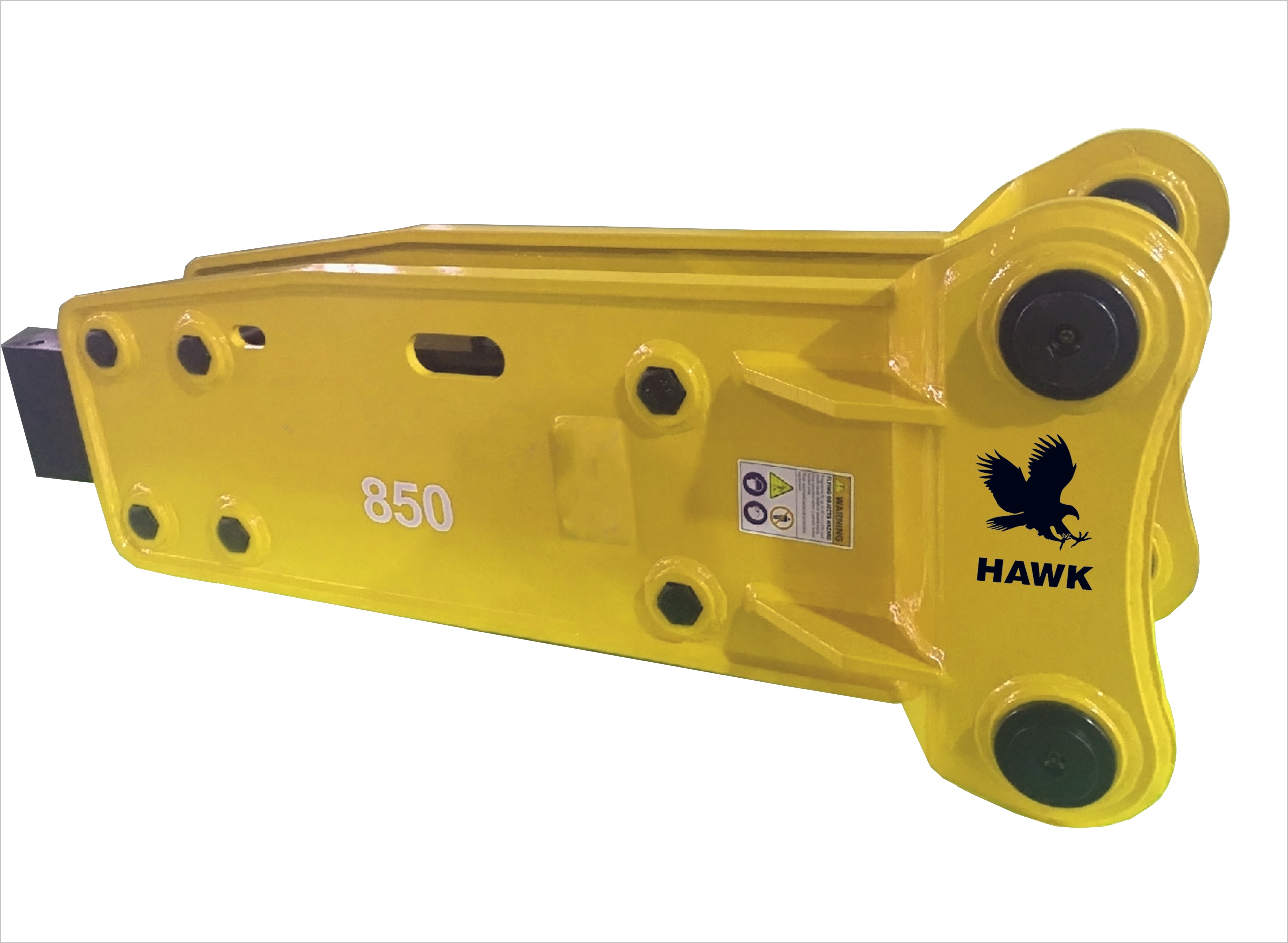 HAWK’s hydraulic breaker hammer is essential in mining, demolitions, excavations, and quarries as it chips away large boulders and concrete structures. Most contractors prefer using the hydraulic hammer breaker because of its high performance, and it is also why it is present on most construction sites. The brand’s hydraulic hammer rock breaker reduces manual work, relatively saves energy, and stands to its efficient but straightforward working principle. 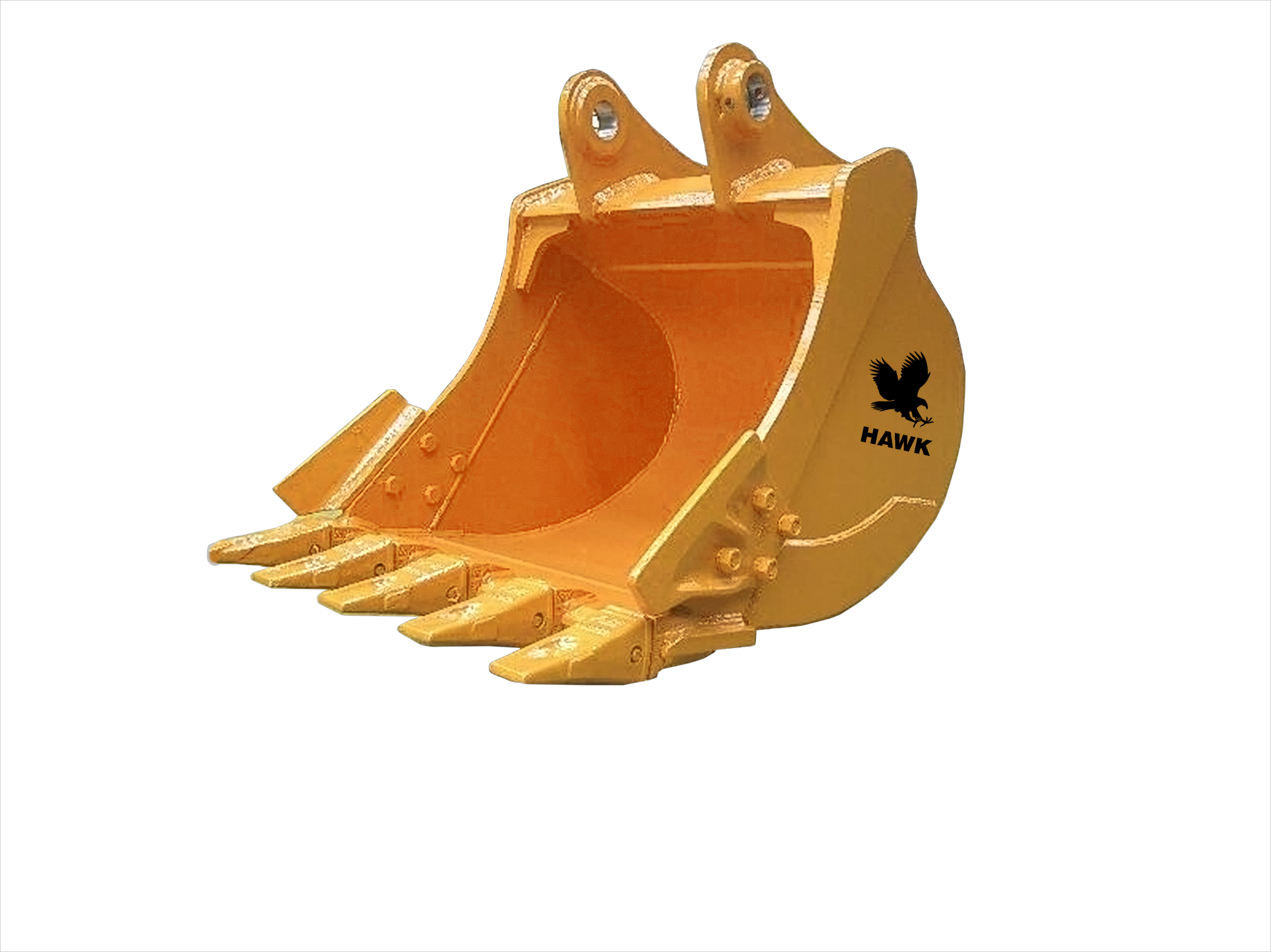 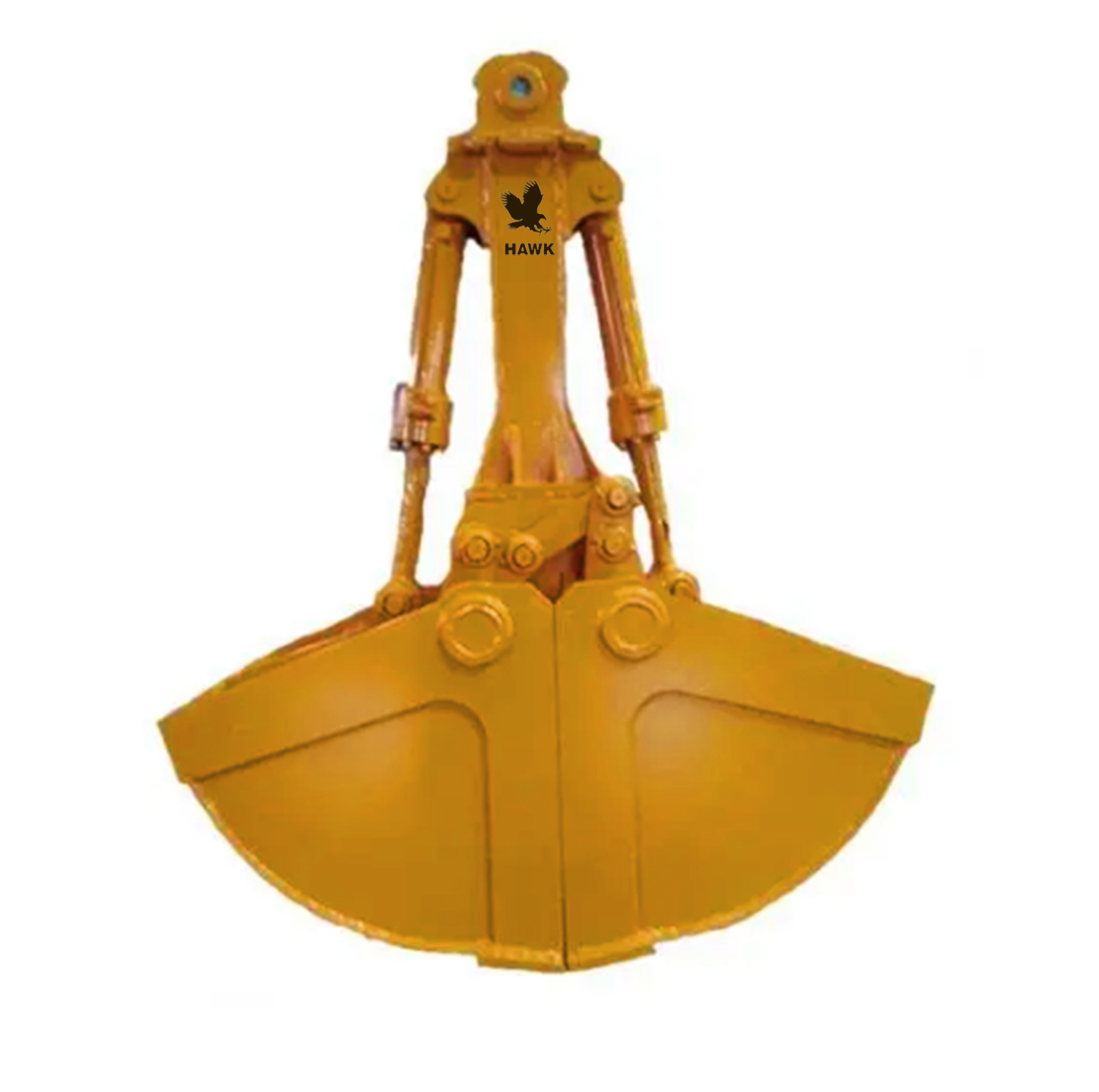 HAWK’s excavator clamshell bucket is best for dredging and material re-handling. This clamshell bucket is available in three different versions: heavy-duty, standard, and light. Regardless of the versions, these equipment pieces feature a 360-degree sealed rotation. There are also units meant for environmental applications.

HAWK’s excavator clamshell bucket is best for dredging and material re-handling. This clamshell bucket is available in three different versions: heavy-duty, standard, and light. Regardless of the versions, these equipment pieces feature a 360-degree sealed rotation. There are also units meant for environmental applications. 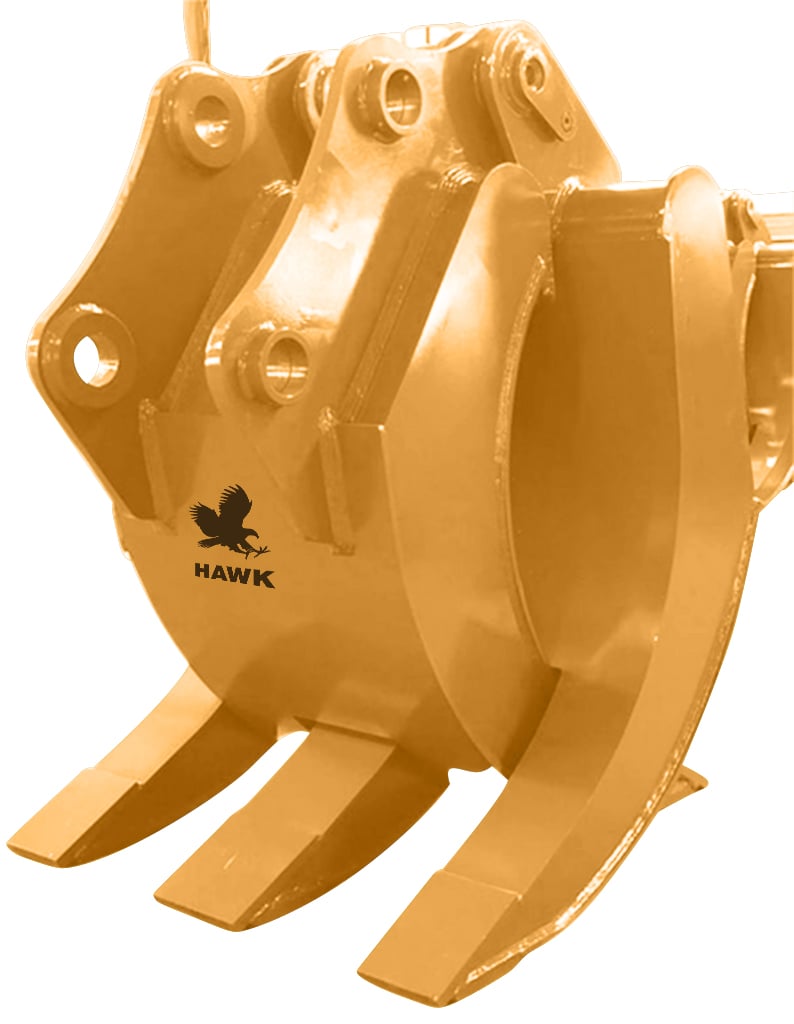 HAWK’s mechanical grapple is an excellent alternative to excavator buckets, converting the latter into machines fit for demolition site cleanups, sorting trash, and handling loose materials. HAWK offers different sizes and models to match any kind of excavator tasks you have on-site. 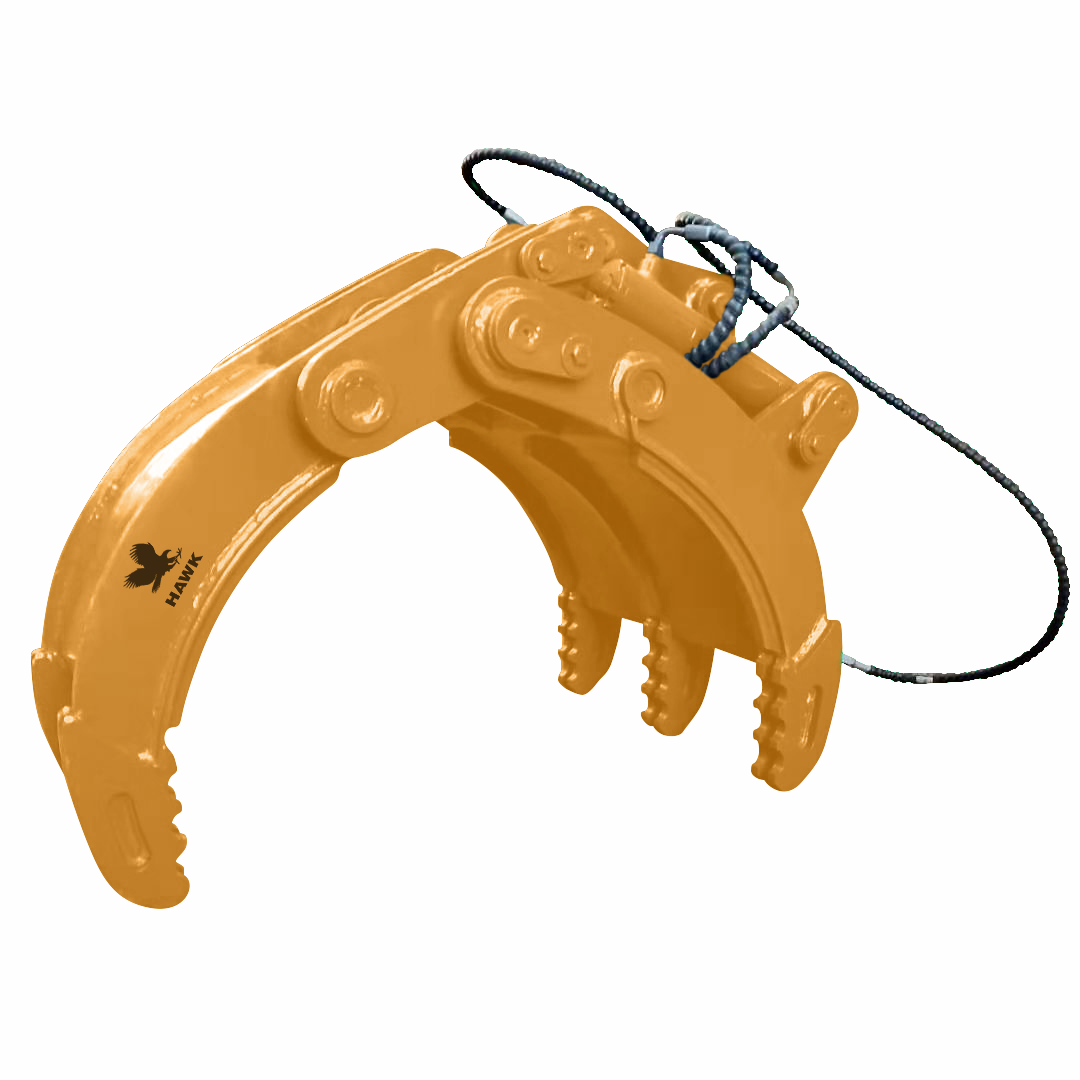 HAWK’s hydraulic grapple for excavator comes with a vast jaw opening quickly, allowing the operator to pick up different larch materials. The hydraulic grapple design also gives a better, firmer grip, making it easy for users to grab uneven loads. With this, they seamlessly improve the efficiency and productivity of loading cycles. 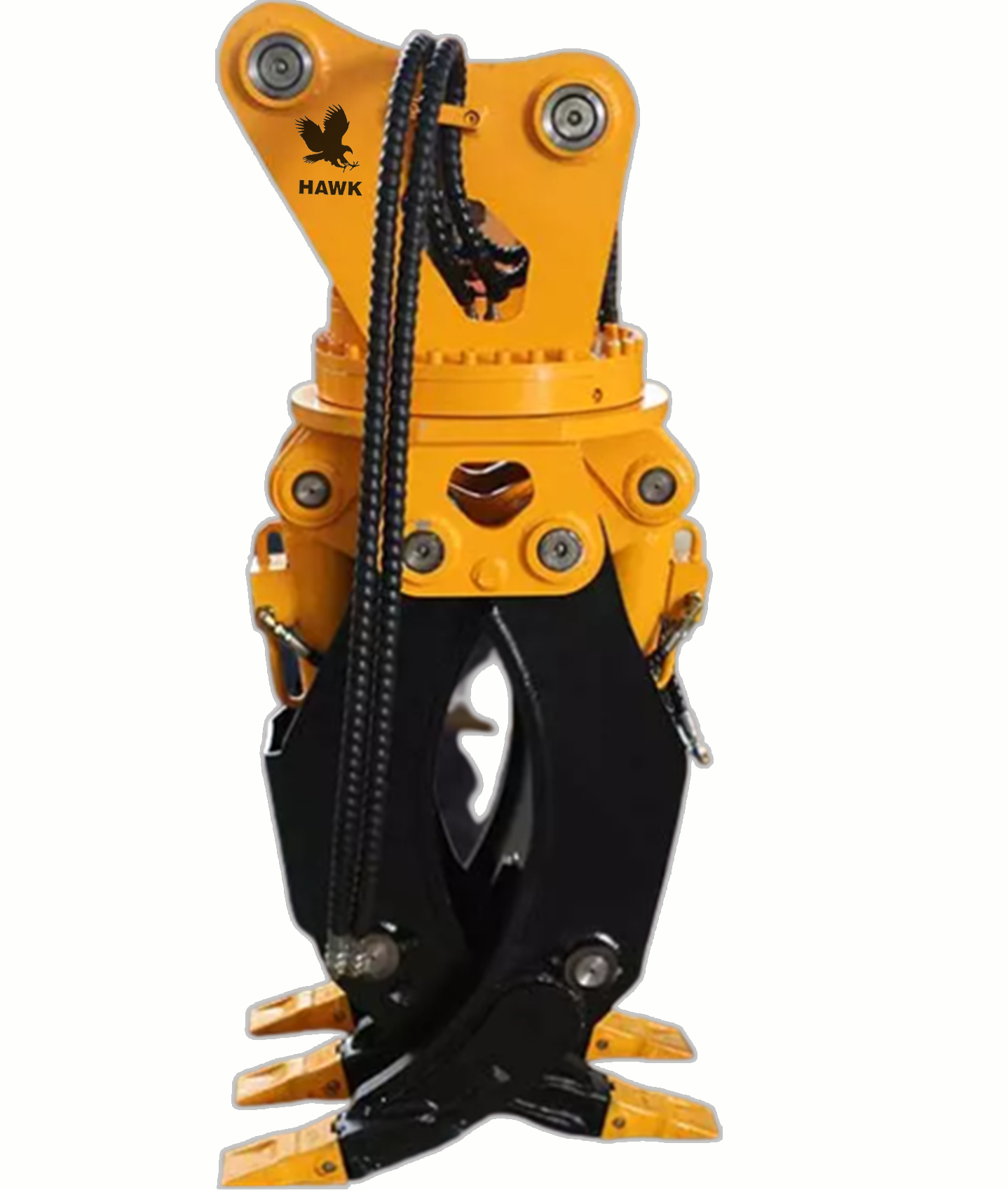 HAWK’s Demolition Grapple is a heavy-duty attachment that is commonly used in demolition and construction work. It is typically attached to an excavator or a large piece of construction equipment and is used to grab, lift, and move large pieces of debris, such as concrete, steel, and timber.

Productivity
Achieve up to 9% faster cycle times and greater power thanks to an improved hydraulic system with an electronically controlled hydraulic pump, a larger control valve and solenoid valves. Craning an uneven load? Activate the standard Free-Swing feature for improved control. Working at night? Opt for the LED light package. To help tailor the machine to the operator and the application, a control pattern selector and power mode selector both come standard.

Fuel Efficiency
An SCR solution lets the engine run at peak performance to provide full throttle response throughout the work cycle while still meeting Tier 4 Final emissions regulations and providing up to 5% greater fuel efficiency. And without a Diesel Particulate Filter to replace, SCR is simple too. Simply add a little Diesel Exhaust Fluid during fill up and go.

Comfort and Visibility
The improved cab provides comfort like never before. There’s more entry room and foot space. The air-ride seat is larger to reduce pressure points, slides forward and back, tilts back up to 65°, has an adjustable lumbar system and a built-in heater. An innovative armrest design adjusts independently of the console while still ensuring joysticks are always comfortably within reach. Even the pedals can adjust ±22° to suit personal preference. There’s also a Bluetooth radio and climate control system that responds to sunlight. The 7″ widescreen color monitor provides a constant rear camera view for increased awareness.

Serviceability
When you invest in CASE equipment, you need it to last. We make it easy. D Series excavators are no exception. A Standard oil sample ports allows for quick sampling of engine oil and hydraulic oil while grouped service points, tilt-out coolers and auto-locking side panels that stay open make it easy to perform routine maintenance. We even added handrails to make it easier to get around the machine.

OEM-Fit Machine Control
The CASE CX210D is now available with optional OEM-Fit 2D and 3D machine control excavation solutions. This takes the guesswork out of matching machine and solution, and guarantees that each system is installed and tested by certified CASE precision specialists. It also simplifies the acquisition process and allows for precision excavation technology to be grouped in with the purchase of the machine — combining the financing approval, rate and payment. OEM-fit machine control solutions also increase the residual/resale value of each excavator, confirming to future buyers that the system is designed and proven to work with the CX210D.